An Open Letter from our First Alumni Scholarship Student

I am very grateful to the IDS Alumni Team for their generous support to my educational ambitions in Development Studies by selecting me for the IDS Alumni Scholarship.

I am in permanent employment with Govt. of Balochistan as a fast stream entrant as Civil Service Officer since 2011. During all this period I have served Govt. of Balochistan in different positions and was responsible for a variety of tasks including supervision & monitoring of developmental schemes, managing a housing scheme, ensuring provision of health and educational services and other basic amenities to the poor masses and to some extent looking after law and order situation within a District.

Capacity building is a vital part of our career planning which helps us better understand the key issues and in effective service delivery which are crucial to the Economic Growth and Human Development. I, therefore, planned to study a course in Developmental Studies to get the knowhow of the modern developmental theories and ideas being practiced in different parts of the world. It will surely help me in making a positive and responsible contribution to make this world a better place for the humanity.

I was interested to secure a place within the Institute of Development Studies (IDS) for this course as IDS is a well-known research institution, as well as it has a result oriented approach.  Moreover I found this institution challenging the conventional and traditional ways of dealing with longstanding world developmental issues.

I am enrolled on MA Development Studies and I hope this one year course will help me in grasping the key concepts and ideas about various paradigms of Development and ways to counter the obstacles to development such as bad governance, lack of transparency and accountability, economic dependence, poverty, lack of proper infrastructure and many more.

I intend to resume my service with the Govt. of Balochistan after the completion of this course. Balochistan is the most under-developed and poverty ridden province of Pakistan. This problem of under-development engendered so many social, political and economic complications within the region. I am hopeful that after completion of this course I will be able to take informed decisions in my future assignments with Govt. of Balochistan, and play a positive and productive role in bringing the marginalized communities in the mainstream to reduce the level of distrust on the State.

I assure the respected IDS Alumni team that their generous contribution will certainly make an impact on the lives of millions of people living thousands of miles away.

Why are 1 in 4 South Africans hungry? 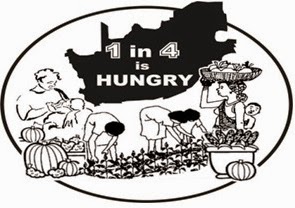 On Saturday afternoon, 18 October, more than 300 people, mostly farm women from small towns and farms in the affluent and picturesque wine and fruit growing region of the Western Cape, marched through the streets of Cape Town. Their bright green T-shirts proclaimed ‘HUNGER HURTS’. Many carried hand-written placards and banners:

The march was organised by the NGO ‘Women on Farms Project’ as a World Food Day event. It coincided with the launch this month of ‘Hidden Hunger in South Africa’, a report by Oxfam which highlights the shocking finding, from the 2013 South African National Health and Nutrition Examination Survey, that 26% – one in four, or approximately 13 million – of South Africans currently suffer from hunger and a further 28% per cent are at risk of hunger.

How can over half of all South Africans be food insecure, in an upper-middle-income country that produces more than enough food to feed the nation – enough, in fact, to export almost 2 million tons of maize (pdf) each year to its neighbours and overseas? As with many of South Africa’s economic and social challenges, inequality is at the heart of the issue. It is not inadequate availability of food that is the problem; it is inadequate access to food – by race, class and gender.

The Oxfam report identifies several factors for food insecurity in South Africa, including:

How is food security a priority for the South African Government?

The marchers approached Parliament. Their placards asked some challenging questions:

R12.41 (about 70p) is the legislated hourly minimum wage for farm workers in South Africa. Their monthly minimum wage of R2,275 equates to just £127, or $218, far below the national average gross national income (GNI) per capita of $600. In many households this is the only income, to be divided among several adults and children. A simulation by the Bureau for Food and Agricultural Policy found that a nutritionally balanced diet would cost a family of four R2,308 per month in 2012 (pdf). 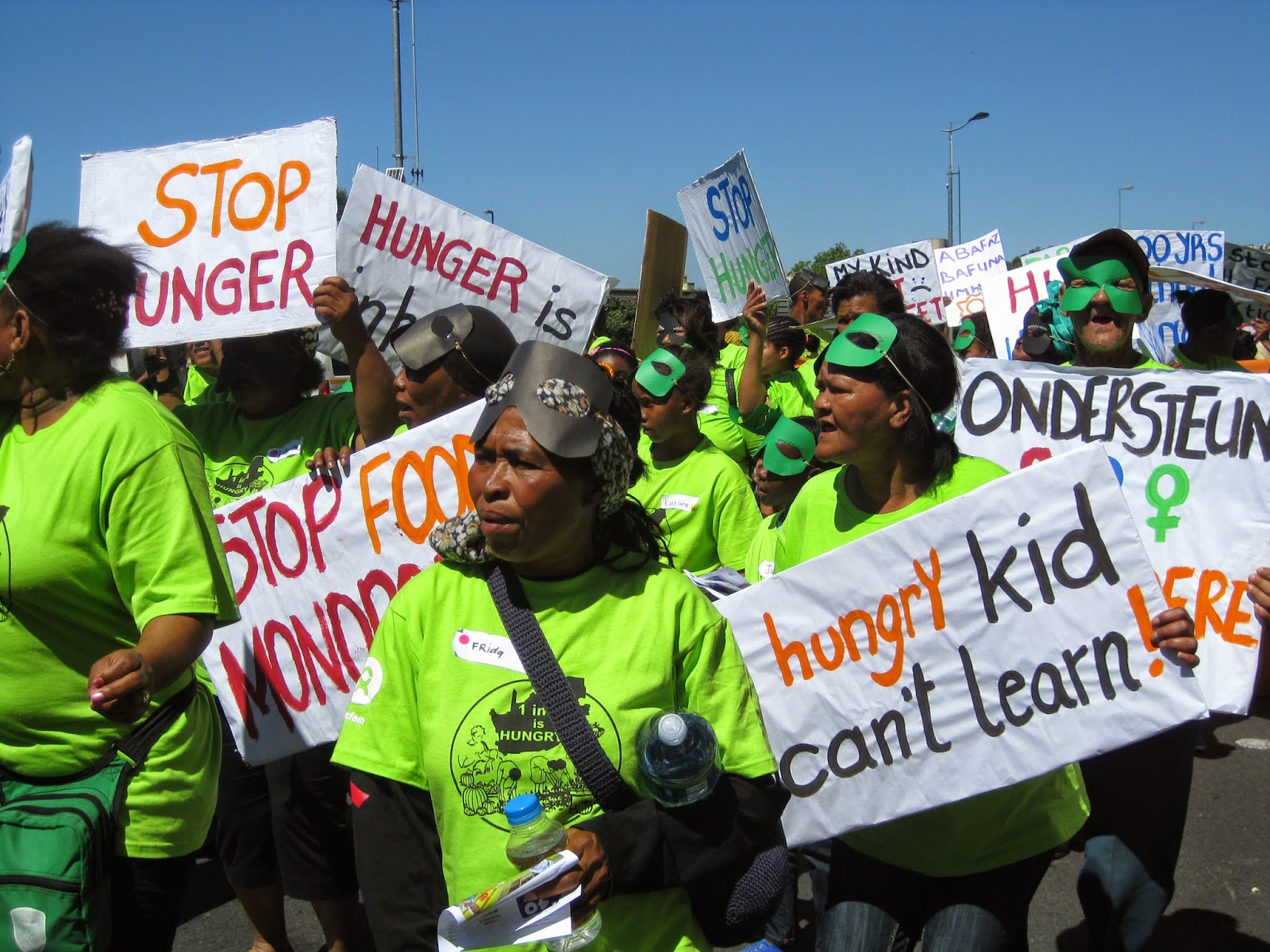 The marchers in Cape Town reached the gates of Parliament. A spokesperson for the farmwomen read their Memorandum aloud before handing it over to representatives from the Department of Agriculture and the Department of Rural Development and Land Reform, who signed it to acknowledge receipt before responding.

The Memorandum included the following demands, among others:


The Government spokesperson responded, but the farm women were not easily convinced.

Government: Food security is a priority for this government.
Farm woman: How? How?
Government: We will ensure that no South African has less than two meals a day.
Farm woman: More empty promises!”
Government: This week we celebrated World Food Day...
Farm woman: There is nothing to celebrate. We are hungry.

Nothing to celebrate, indeed. As Nelson Mandela said around the time of South Africa’s transition to democracy in 1994:


“Freedom is meaningless if people cannot put food in their stomachs.”


Authors
Stephen Devereux is a Research Fellow in the Rural Futures cluster at IDS, and an adviser to the Centre of Excellence in Food Security at the University of the Western Cape.
Colette Solomon is Director of the NGO ‘Women on Farms Project’ and an IDS Alumna.

This IDS Alumni blog is no longer used but has transferred to the IDS website.
IDS alumni are located all over the world and after studying at IDS go on to a range of careers in development. This makes the Alumni Blog uniquely placed to represent opinions on development from a diverse range of experience and professions, all of whom have IDS in common.
The posts on this blog reflect the opinions of each individual, and not necessarily those of IDS.